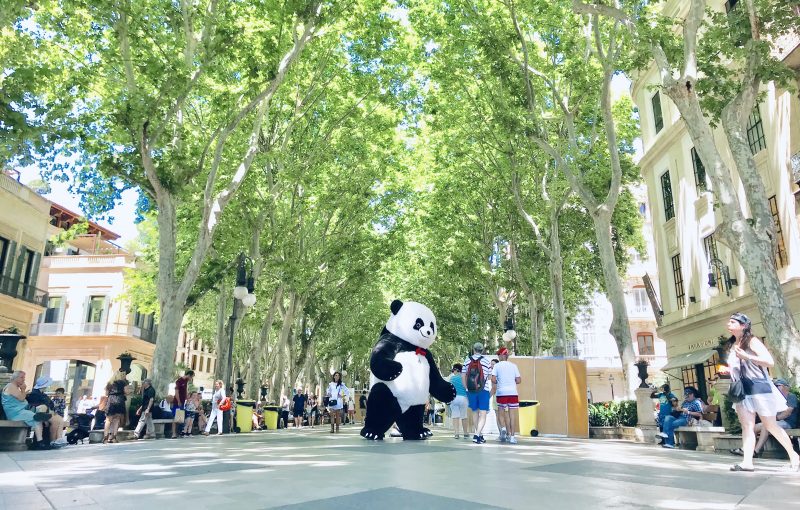 Paseo del Borne, or “Passeig des Born” in Catalan, is arguably the most elegant avenue in Palma.

Paseo del Borne, or “Passeig des Born” in Catalan, is arguably the most elegant avenue in Palma. Not surprisingly, many luxury designers such as Rolex, Louis Vuitton, Carolina Herrera and Mulberry have installed themselves here, and the area has been nicknamed the Golden Mile.
You may have heard the word “born” before, in other towns in Spain. It signifies an area for games, such as jousting tournaments between knights in the middle ages. The avenue was actually once a kind of estuary until the great flood of 1403 turned the adjoining streets into terrible sewers. Much later, during the construction of the fifth walled enclosure of the town, the so-called Torrent de Sa Riera waterway was moved. Today, you can view the canal beside Es Baluard Contemporary Art Museum. The reconstruction left Borne free as public space and for celebrations, which it is still used for today.
The avenue has undergone many alterations since the time of medieval knights. A restructuring took place in 1833, which is when the Jacinto Mateu Sureda’s Sphinxes were added, and the Turtle Fountain installed. In 1863 an effigy of Isabel II was inaugurated, but was pulled down five years later during the revolution. Though Franco did rename the avenue after himself, the dictator’s name didn’t really stick, and people continued to refer to it as Born.
The well-kept promenade is an attraction in itself and worth strolling down at leisure, admiring the architecture on each side. The striking building in which Zara is housed, was once Borne’s famous cinema. On the same side of the road, you’ll come across Casal Solleric. It’s an 18th century converted mansion which now hosts temporary art exhibitions; there’s also a Tourist Office here if you’re after more information about what to do and see in Palma.

There are a number of restaurants where you can stop for lunch in Passeig des Born. The most common reason to visit Paseo del Borne and connecting avenue Jaime III, is for the excellent shopping. From Paseo del Borne you can explore the historic streets of Palma’s old town, and walk to the iconic Cathedral La Seu or Almudaina Palace. Even the trendy Santa Catalina neighbourhood is just a fifteen minute walk from here.