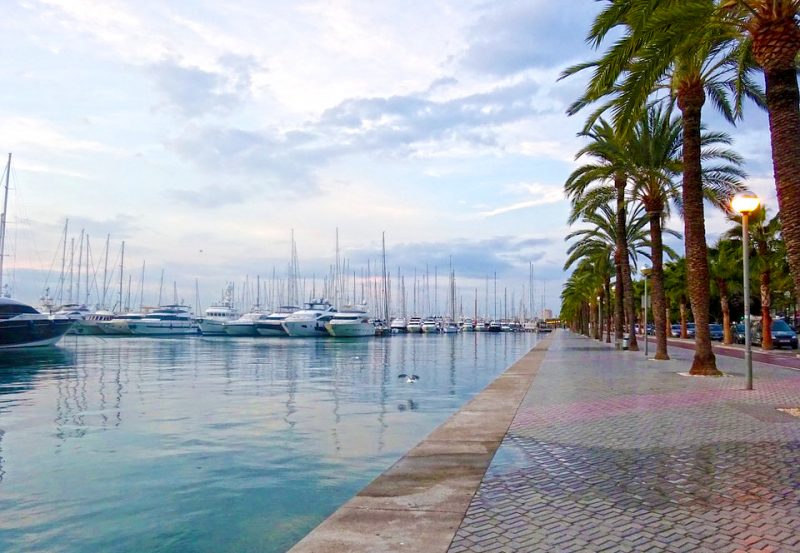 The Paseo Maritimo or in Catalan, “Passeig Maritim”, refers to the wonderful promenade that runs parallel to Palma’s seafront. The wide avenue is made up of a pedestrianised walkway and a cycle lane, and is enjoyed by tourists and locals alike.

The official name of the promenade is “Avenida Gabriel Roca”, after the chief engineer of Palma’s port during 1940 and 1962. Roca provided the impulse behind the planning and creation of the paseo maritimo and presided over Mallorca’s tourism board for seven years.
The Paseo Maritimo now passes the Cathedral “La Seu”, but it would have looked very different four decades ago. Originally the sea came right up to the walls around the Cathedral. In the 1970s, construction of a new road and boulevard pushed the sea back.
To maintain the magic of a reflecting pool, city planners created an artificial sea water lake instead. The area is called Parc de la Mar and is on paseo maritimo’s scenic route. Concerts, al fresco cinema and artisan fairs are all staged here at different times throughout the year.

A walk along the Paseo Maritimo is always an uplifting experience. Palm trees line the way passed emblematic buildings and Palma’s yacht-filled harbour. The ever-changing view never gets boring, with pink sunrises and golden sunsets painting new masterpieces on the horizon each day.

Starting from the Porto Pi end,  you’ll pass the famous night club, Tito’s, which first opened in the 1920’s; Palma’s Auditorium which puts on a diverse programme of shows and concerts and the trendy neighbourhood of Santa Catalina, which really comes alive in the evening.
Also you will pass by the 16th century fortress wall around Es Baluard Contemporary Art Museum, and further on, you will see Bellver Castle in the distance. After that, the Royal Palace of Almudaina will soon come into view, followed by the Cathedral.

It’s the perfect route for a relaxed stroll, cycle or roller blade. You can hire a bike in Palma from a number of rental stations, and roller blades.