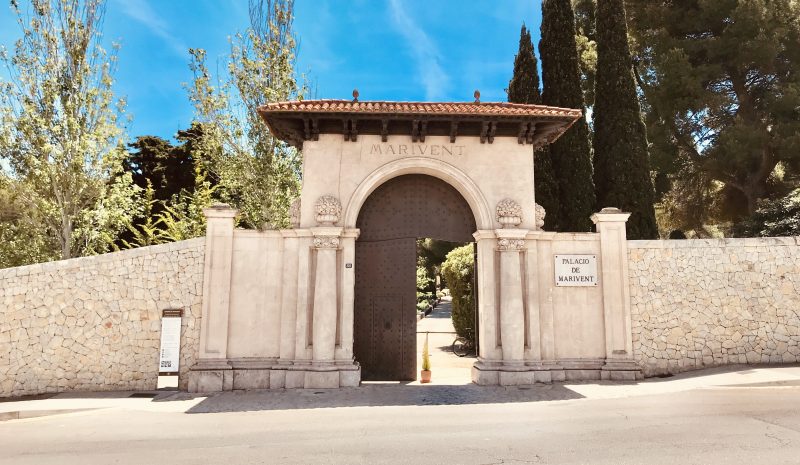 The Avenida Juan Miró connects Cala Major to Palma, to the west of the city. It is named after the Spanish painter and sculptor who was born in Barcelona and lived for most of his adult life in Palma. On the sea side of the road is Marivent Palace, previously known as Saridakis Palace and the current summer residence of the Spanish Royal Family.

John Saridakis (1877-1963) was a Greek-Egyptian painter and art collector who started life as an engineer in the Chilean copper mines. He trained under the painter Pedro Lira, specialising in landscape paintings and engravings of buildings and over the years amassed a billionaire sized fortune. He was rubbed shoulders with the rich and famous and could count his compatriot Aristotle Onassis amongst his friends.
Saridakis moved to Palma in 1923 and he commissioned Guillem Forteza Piña (1892-1943) , the Mayor of Palma, to design a palace style building with traditional and Italian influences in the secluded location on the coast near Cala Major, southwest of Palma. Work was marivent palace palma de mallorca complete in 1925 and it became home for his family and his collection of over 100 paintings, 1,300 pieces of antique furniture and a library of 2,000 books.
Saridakis lived in the house until his death in 1963 and two years later his widow, Annunziata Taffani – Marconi donated the estate to the Council , with the proviso that the house was turned into a public museum dedicated to her husband’s collection. To begin with the arrangement work but when the government of the Balearic Islands was dissolved following the death of General Francisco Franco in 1975, the Council arranged for the Spanish Royal House to use the palace as their summer home. It was also given a new name, Marivent Palace; or Sea and Wind Palace.
Next to the palace there is royal gardens, which was opened for public use. The gardens is able to hold a maximum of 300 people, the gardens include 12 bronze sculptures by Joan Miro. They were produced between 1969 and 1981 and were donated by the Miro family. The colour-washed space is home to 40 different species of plant, most of them native to Mallorca.