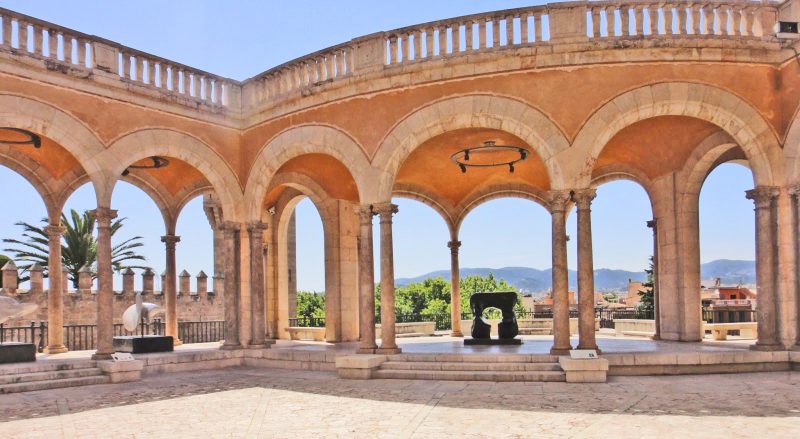 Fundacion Bartolome March - is the head office of the Foundation is where the family residence in Palma was located for decades.

Fundacion Bartolome March – is the head office of the Foundation is where the family residence in Palma was located for decades. It was built between 1939 and 1945 and some of the most representative artists and professionals of the era were involved in it. Without any doubt, the promoter, the financier Juan March Ordinas (1880-1962), acquired the site because it was in a privileged location in the historical town centre, surrounded by emblematic monuments like the Cathedral, the Almudaina Palace and representative buildings such as the old casino, today the seat of Parliament of the Balearic Islands. The project was carried out by the Architect Luis Gutiérrez Soto (1900-1977) and for him, a highly prestigious professional, the March residence was one of his most important undertakings, not only because of the client but also because of the scale and complexity of the work.

The museum houses a total of five collections: Modern and contemporary sculpture, including works by artists like Henry Moore, Barbara Hepworth, Pietro Consagra, Auguste Rodin, Eusebi Sempere or Eduardo Chillida; Belén Napolitano, from the eighteenth century and consisting of about two thousand pieces; Josep Maria Sert, two murals made by the Catalan artist in the dome of the central staircase and the music room; Bibliography and Art, with a display of manuscripts, preciosist books and artistic book bindings; and Cartography, a collection of Majorcan navigation charts from the fourteenth and fifteenth centuries compiled by Bartolomé March.
The palace also features a specialized thematic Balearic library, the collection of which ranges from the fourteenth century to the present. The Bartolomé March Foundation is the headquarters in Palma of the International Music Festival of Deia.