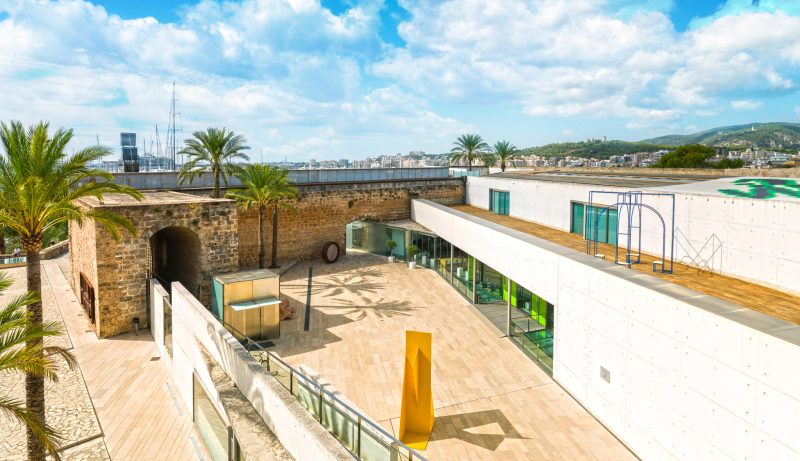 Museum Es Baluard is in a privileged place, the old bastion of Sant Pere

Palma’s modern art museum (Es Baluard Museu d’Art Modern i Contemporani de Palma) is a “must visit”. Museum Es Baluard is in a privileged place, the old bastion of Sant Pere, a 16th-century building on Palma’s bay and designed by the Italian engineer Giovan Giacomo Palearo Fratin ‘El Fratín’. The Museum area is 5.027 square meters, half of them for exhibition. Architects Jaime and Luis Garcia Ruiz, Angel Sanchez-Cantalejo and Vicente Tomas are the enlargement’s authors.
The then King and Queen of Spain officially opened the museum Es Baluard in January 2004, and in the first month, there were 55,000 visitors. This is a tremendous validation by the citizens and visitors to the island. A visit to the Es Baluard museum will confirm that words are insufficient to describe the architectural masterpiece that has replaced what was a dumping ground for more than 50 years.

Es Baluard Museu d’Art Modern i Contemporani de Palma’s collection includes works by the major artists and movements that have converged and are converging in the Balearic Islands since the inception of the twentieth century until today and relates them to works from other artistic contexts in Spain and abroad.
Starting at the time in which pictorial modernism spurred the renovation of landscape painting in Spain and a large group of primarily Catalan painters –Joaquim Mir, Santiago Rusinol, Hermen Anglada-Camarasa, Joaquin Sorolla and Antoni Gelabert, coincided in Mallorca, and following with a tour of the avant-gardes up to the major movements of the mid-twentieth-century – with artists such as Picasso, Joan Miro, Fernand Leger, Rene Magritte, Picabia, Van Dongen, Nicolas de Stael, Juli Ramis, Poliakoff, Wifredo Lam, among others – the Es Baluard collection lays special emphasis on the artistic currents of the second half of the past century and early years of the twenty-first century. In this sense, it covers the broad diversity of contemporary languages: from painting and sculpture to drawing, photography, video and installations with works by Marina Abramovic, Miquel Barcelo, Jim Bird, Christian Boltanski, Jose Manuel Broto, etc.