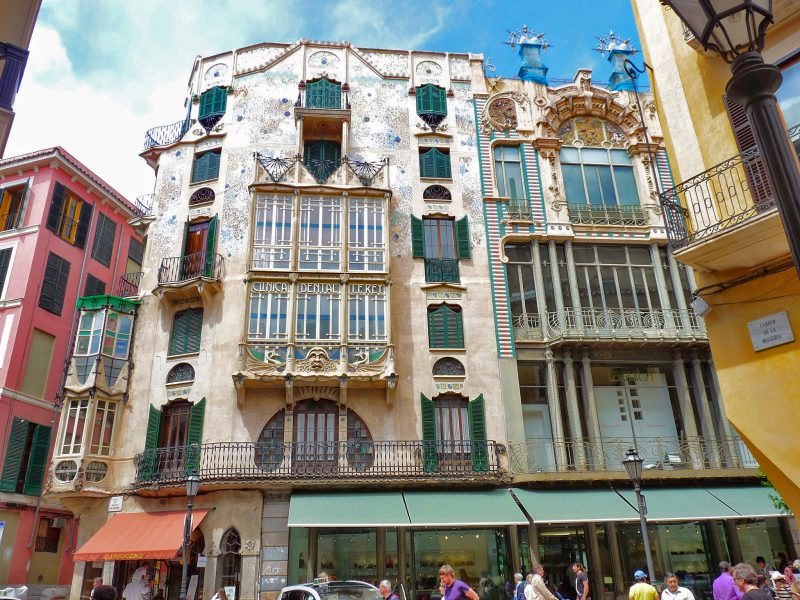 This unique modernist building located in the center of Palma de Mallorca.

This unique modernist building located in the center of Palma de Mallorca, specifically in the street Monges number 2. It was designed by modernist jeweler Lluís Forteza-Rey and we could say that the building would fall within the cataloging of the trend from Art Nouveau in the early twentieth century, Barcelona. The building dates from 1909 and it was assigned to family housing.
In Majorca, in the opinion of some historians, Modernism was a fashion that was particularly encouraged by the church. Bishop Campins contacted Gaudí in 1904 to ask him to manage the renovation works in the Cathedral of Majorca. Without Gaudí’s ten years on the island, Modernism would not have succeeded in the Balearics. Owing to its characteristics, this building represents the Modernist tendency of Art Nouveau, prolonging the stylistic decoration of the façade into the interior design to an unusual degree and showing a strong influence from Catalan Modernism, especially some of Gaudí’s works (Casa Batlló and Parque Güell). Lluis Forteza Rey probably met Gaudí, if only because his father José was the Cathedral’s goldsmith.
This coincided with the renovation works that Gaudí was carrying out in the Cathedral. This five-storey building was originally intended as apartments, and Forteza Rey carried out the interior decoration and prepared a plan for the facade. The eye is drawn to the profuse sculptural decoration on the galleries and bay windows that is superimposed on the front wall with vegetable, floral and animal themes. A monstrous face flanked by winged dragons on the second floor stands out.
Emphasizes the sculptural decoration in the stands and viewpoints, always accompanied by ornamental plants, animals and flowers.
The richness of the decorative work should also be noted, in which the use of multi-coloured broken tiles set out in an irregular fashion (musivaria) is apparent on the exterior walls, ceramic plates and disks, as well as the variety of arches used to form the openings and the combination of materials: stone, iron, wood and glass. Inside, the decoration of the lobby stands out, where we can see the roof decorated with musivaria, a Gaudí-style parabolic arch, a wrought iron banister on the staircase and glass decorated with floral motifs.