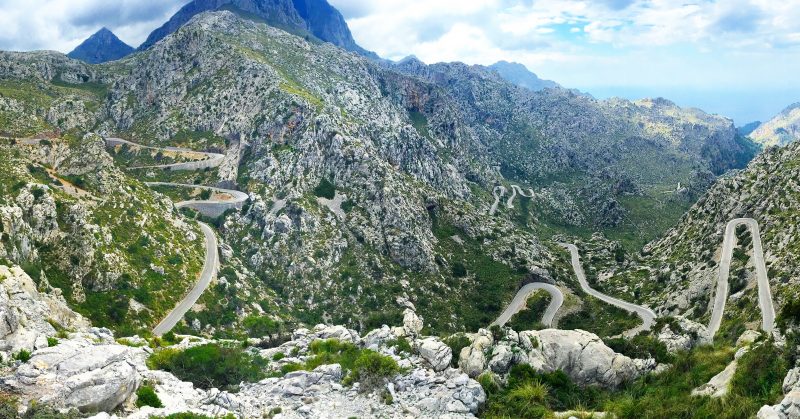 Undoubtedly, the Sa Calobra road (the snake, in Spanish) is one of the most charming places the island of Mallorca offers to visit on wheels.

Undoubtedly, the Sa Calobra road (the snake, in Spanish) is one of the most charming places the island of Mallorca offers to visit on wheels. And, additionally, it is one of the most spectacular panoramic roads on the planet. It is a joy to trace its intricate – and, dangerous – curves, meandering between a steep rocky landscape while enjoying one of the best views of the island, with the Mediterranean in the background. It is also important to finally arrive at the destination and enjoy the charms of the bay which has the same name and the spectacular Torrent de Pareis.

The Sa Calobra road – originally named MA-2141 – was a very impressive engineering work, being part of the improvement of public roads undertaken during the Second Republic and led by the Spanish engineer Antonio Parietti. Its complex layout required six years of construcion -100% manual, without any machinery- and 30.000 cubic meters of stone. Due to the constant budget problems, which led to financial support of the owners of the surrounding farm, Parietti was a visionary and defended his claims traced -compared to the demands of the neighbours who were asking for simpler and cheaper version- thinking of the future touristic use of the road.

The Sa Calobra road is a branch of the MA10 that starts from the municiplity of Escorca, near the Gorg Blau reservoir and at the foot of the Puig Major (maximum height of Malorca with its 1500 meters), and ends on the beach of Cala Tuent. This is a very narrow road, with very few guardrails and no central division in the roadway, including the famous Nus de Sa Corbata (Knot of the tie). At this exact point you will also find one of the most incredible viewpoints of Mallorca.
This spectacular route attracts a large number of visitors, especially during the summer months. It must be added that its asphalt becomes dangerous when it rains. That’s why, it is one of the most dangerous and most difficult roads in Spain. At the same time one of the most spectacular ones, where lovers of curves will be very satisfied. The route is between two ravines: Morro de Sa Vaca and Morro de Ses Felles. Furthermore, its cliffs are some of the most incredible ones in Mallorca. Under normal conditions the road is travelled in about 25 minutes.