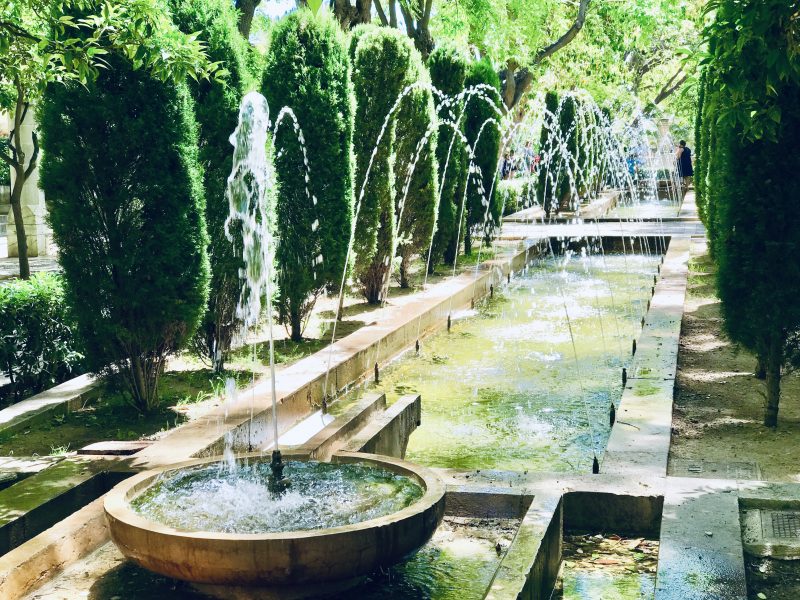 S'Hort del Rei was a mediaeval garden located outside the walls of the Almudaina palace that existed until the 19th century when the area was developed.

S’Hort del Rei was a mediaeval garden located outside the walls of the Almudaina palace that existed until the 19th century when the area was developed. It enjoyed a golden age in the early 14th century in the times of King James II of Majorca, and there were fruit trees, flowers and vegetable gardens. Animals such as rabbits were also bred there. In the 1960s, as part of the plan for restoring the surroundings of the Almudaina palace, the buildings on this site were demolished in order to put in new gardens in a historical style, designed by the Majorcan architect Gabriel Alomar. He combined traditional elements of Majorcan gardens, such as a pergola, with other elements of Andalusian inspiration, like a pond with fountains reminiscent of the one in the Alhambra. However, this new layout has little relationship with the mediaeval one.

The most notable feature of the current gardens is the bow of the shipyard that overflows the swan’s pond, since it is probably Arab and driven from the fortress to the place where the ship waited, as the sea entered into this area And, mixed with La Riera, it arrived, as it is believed, until the current Market Square.

The foner (1898) is the work of the Majorcan sculptor Llorenc Rossello, with which he won the Silver Medal at the Exhibition of Fine Arts in Barcelona in 1898, and represents the mythical Balearic phoners who will fight the punic wars. It is a work that follows the style of the French sculptor Rodin that is appraised in the torsion of the body and the tension of the muscles. It was fused in bronze in 1970.

Jonica (1989) is a marble sculpture by Josep Maria Subirachs. It represents a woman’s body like an Ionic column. The shaft (part of the column between the capital and the base) is the body, while the scrolls (ornament in the form of a spiral or snail, which is placed in the capitals of the Ionic and composite orders) are the breasts.

Nancy (1972) by Alexander Calder. It is an iron sculpture that responds to the Stabile-Mobile type, that is, parts with a fixed part and a cell phone, which the author makes from the decade of the 30’s, the result of a long rudeness that already had started with mobiles.