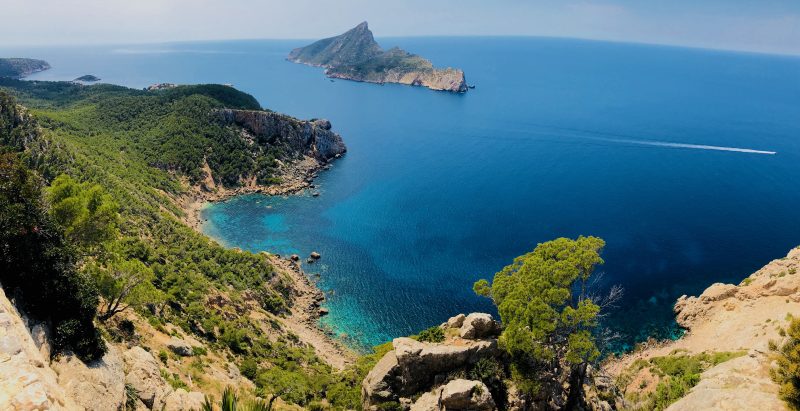 La Trapa is a natural reserve located on the southwestern coast of the Tramuntana mountains, between the towns of Sant Elm and Estellencs. In 1810, the French Revolution forced a group of Trappist monks to leave France and to move to the Balearic island of Mallorca. Monks settled in the valley called “Saint Joseph“, which is located on the rocky coast which was difficult to reach. Trappist monks setteld in the valley and built a monastery, created a system of water supply and built terraces and walls following the traditional dry-stone technique.

The monastery did not survived long. In 1820, La Trapa was dissolved and the monastery was abandoned. The buildings were left to decay. Nowadays, the monastery area is supervised by honorary members of the environmental organization GOB, which finances the complex entirely from private and donated funds. The restoration of the buildings has been taken over by the Island Council of Mallorca. Sadly, in 2013, a forest fire destroyed a large part of the vegetation of the finca.

In la Trapa, you will see the elements of the traditional architecture, such as the houses of the ancient monastery and the remnants of a chapel. There are a spectacular viewpoint, an exceptional balcony with views over the Dragonera island, which looks like a dragon from the sea.

La Trapa is reachable via a very winding gravel road that goes from San Elm over the Coll de ses Animes mountain pass. Hikers need to go on the GR 221 trail, which connects Santa Elm with La Trapa along a narrow mule track along the cliffs. This is very popular trail with a beautiful views of the offshore island of Sa Dragonera.