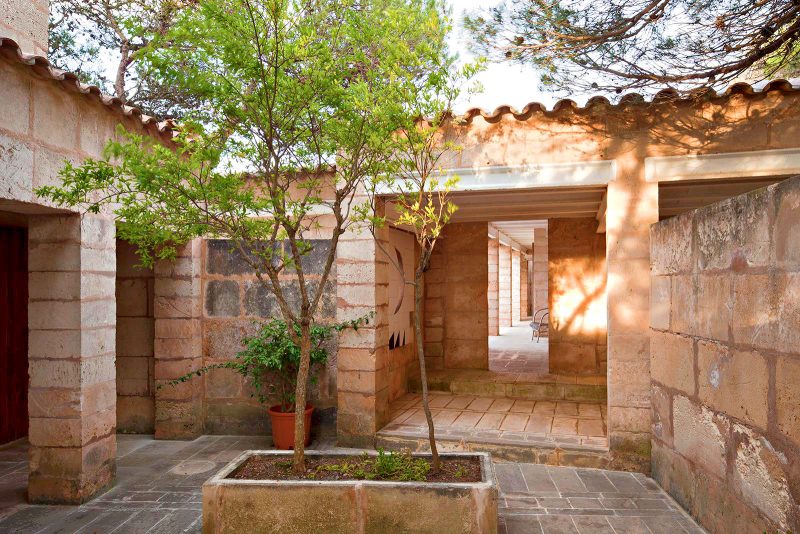 After having to abandon the construction of the Sidney Opera House in 1966, the Danish
architect Jørn Utzon on his way home, made an intermediate stop at Mallorca. The island
fascinated him to such a degree that he decided to build a summer house there. It was
located facing the Mediterranean, on a cliff near a small fishing village and he gave it the
name of his wife, Lis. In 1994, he felt obliged to move from his house, which had turned into
a place of pilgrimage for architects. Utzon built another house, Can Feliz, also in Mallorca,
but this time its location is kept a total secret.

Looking, in Porto Pietro, for an ideal refuge during his holidays, Utzon built Can Lis in 1971,
set among myrtle and pine trees, with an extraordinary view to the sea. Integrating with the
colours in the landscape, the main building material is a hard local limestone, called marés
stone, which varies from gold to pink in colour. The original concept for the house was the
same as for the one that Utzon had intended to build in Sidney; a sequence of pavilions
linked by a wall, and arranged so as to respond to the various functions within the dwelling.

The orientation of the pavilions in Can Lis selects distinctive views of the Mediterranean, and
consequently, the furniture became fixed, built on site and finished with shiny ceramic tiles.
Additionally, as the window frames were mounted on the outside surface of the walls, they
were made invisible from the interior, which again, stimulates the effect of light, blurring the
limits between the dark interior of the house and the blistering Mediterranean sun. For all
these reasons, family life follows a route as the day passes which seems to pursue the
passage of the sun.