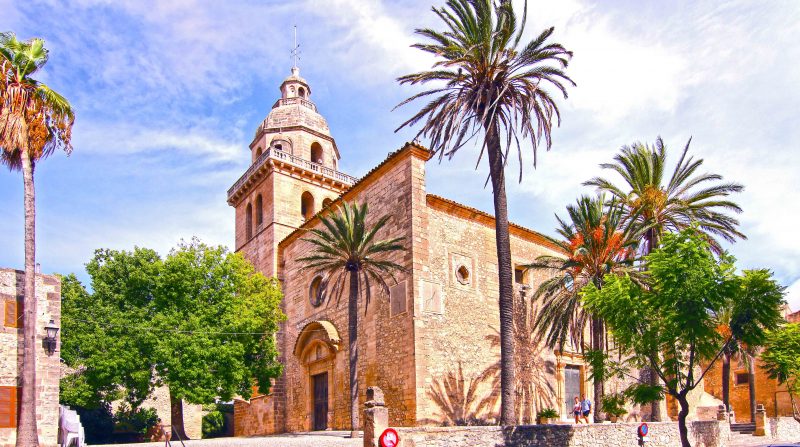 Perched on a hilltop and surrounded by quaint stone windmills, the medieval town of Montuiri is a perfect example of traditional, rural Mallorca. High on a ridge surrounded

Montuiri is municipality in central Majorca, one of the Balearic Islands, Spain. It is a small town built on a hill. Perched on a hilltop and surrounded by quaint stone windmills, the medieval town of Montuiri is a perfect example of traditional, rural Mallorca.

High on a ridge surrounded by old stone windmills, the village of Montuiri is probably the most impressive sight along the Palma-Manacor road.
Montuiri is a pleasant town to stroll around for an hour, with a mix of old medieval housing and grander mansions from later centuries.

Montuiri officially dates back to 1329 although there are signs of earlier Bronze Age settlements. This includes one of the most important archeological sites in Mallorca. The name literally means “mountain town” in Latin and uses the well-known eight windmills of the Molinar district as the town symbol. The windmills have not been used since the 1920’s but Montuiri still produces grain and almonds as it has been doing for centuries. Today Montuiri is a residential town and is considered one of the best places to live in central Mallorca.
Walking around this pretty village you will see different examples of architecture going back to mediaeval times. Some buildings have a definite Moorish influence such as the “Velar de Sa Torre”, the “Alcoraia’ Salmudaina” and “Es Rafal Aixat”. You will also see grander mansions which are a testament to the wealthy residents of the past, as this was once a popular town for money lenders.
A nearby site of great importance is the prehistoric “Son Fornes” which dates back to 900 BC and still has dwellings and towers to see. It is accessed via the museum of Son Fornes which is based in the “Moli des Floret” building, a restored 18th century flour mill.
Within the town of Montuiri, the imposing, gothic church of Sant Bartomeu is worth seeing for its impressive interior.
The best views in the area are to be found at the top of the peak of “Puig de Sant Miguel” where the sanctuary of “Santuari de la Bona Pau” is located which dates back to 1395 on the site of a former hermitage.
Montuiri is based in rural Mallorca and there are many excellent vineyards to visit in this area. The second wine region of Mallorca is based around the nearby town of Felanitx.